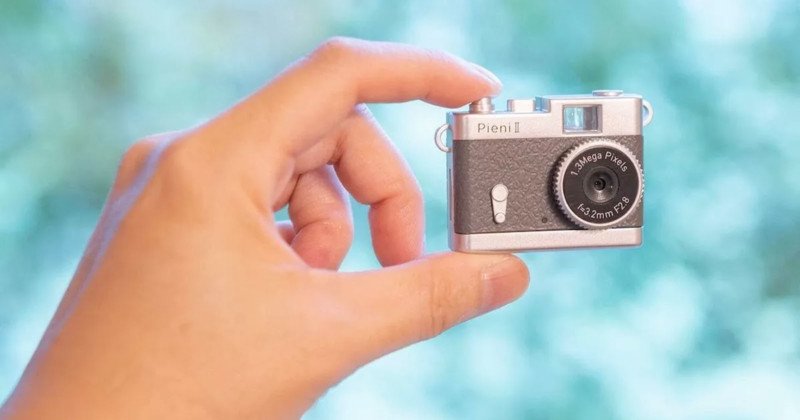 Kenko Tokina is a Japanese company that focuses on manufacturing camera lenses and recently has introduced the smallest digital camera called the Pieni II. This little camera has a width of 51mm, a depth of 18mm, and a height of just 36mm, and it can take photos and videos with a resolution of 1.3 megapixels.

The Pieni II weighs only 18 grammes, is capable of taking real photographs and recording video, and saves its data to a microSD card in the camera. The microSD card is sold separately from the camera. In addition, this miniature camera comes with a neck strap so it can be worn as a fashion accessory. It also has a magnet on the back so it can be stuck on the fridge.

The image sensor in the Pieni II is a 1/10 Type CMOS, and it has a resolution of only 1.31 megapixels with the capability of switching between taking photos and recording videos. On top of that, Kenko Tokina claims that the camera will produce images with a quality that is resembling watercolour or oil painting. With that being said, keep in mind that don’t expect a decent quality of photo and video from this camera since it has an extremely low resolution.

Furthermore, users can use a USB cable not only for data transfer but also for charging this incredibly tiny camera. There is a choice between four different colours: mint, peach, orange, and grey. In addition, the Pieni II is also made available in the Sanrio Character Toy Camera, which features four different characters that consist of Hello Kitty, Cinnamoroll, Pompompurin, and Pochacco.