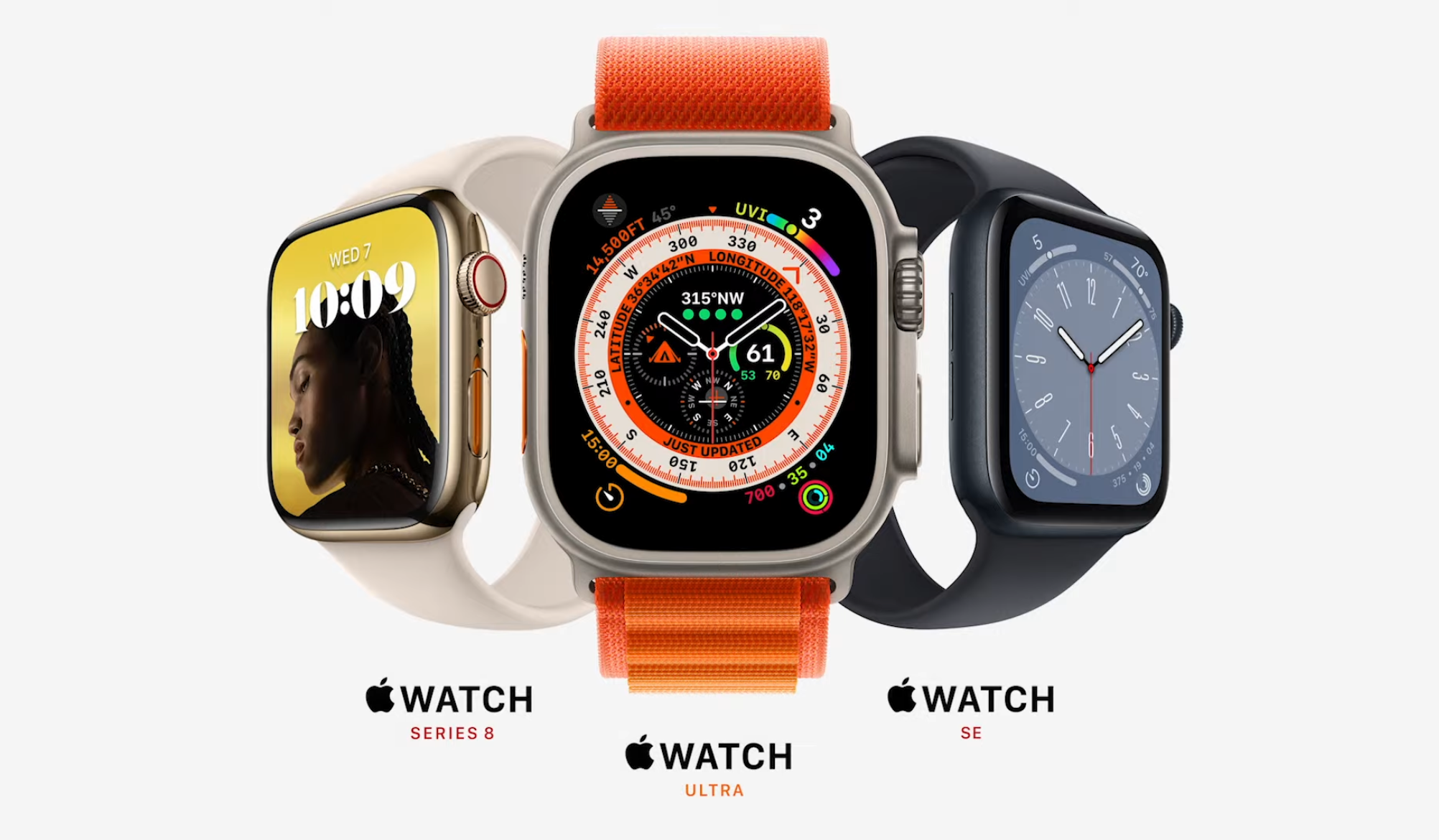 After almost a year of rumors and even more hype, today Apple will unveil its new Apple Watch lineup and here is what Apple brings to the table.

The new Apple Watch Series 8 has an 18-hour all-day battery life. But now that it has a new Low Power Mode, the battery life can be increased by up to 36 hours. Apple Watch Series 8 cases come in two sizes, 41mm and 45mm, with a variety of colors. The aluminum cases come in starlight, midnight, silver, and (PRODUCT)RED, while the stainless steel models are available in silver, graphite, and gold.

Bring new, cutting-edge temperature sensor functionality with a two-sensor design – one under the display and one at the bottom on the skin – made for women’s health to monitor their ovulation cycle and enable more accurate period predictions that can be useful for family planning.

The most significant feature is the new Crash Detection, which combines the iPhone’s barometer, GPS, and microphone to detect the distinctive patterns that can indicate whether or not a severe collision has occurred. If the user is unresponsive, the devices automatically notify emergency services after a 10-second countdown and share the user’s device location with our emergency contacts.

Features an Always-On Retina display with a trong crack-resistant front crystal, the official selling pricing for the Apple Watch 8 series begins at RM1,899 for the 41mm case size and RM1,999 for the 45mm case size. There are also two connectivity choices available, GPS connectivity starts at RM1,899, and GPS and cellular connectivity starts at RM2,299. Presently, general sales are scheduled to begin in the United States on September 16, meanwhile local availability remains unknown until Apple Malaysia confirms otherwise.

The new Apple Watch SE has been revealed, the 1st generation was introduced in 2020 which is 2 year ago and now Apple brings Apple Watch SE second generation that employs the S8 chipset – same chipset used in Apple Watch 8 series that boost performance up to 20% faster from its predecessors.

The price for the new Apple Watch SE 2nd generation is starting at RM1,199 for 40mm case size and RM1,299 for 44mm case size, meanwhile same as Apple Watch 8, it offered two options of connectivity which is GPS at RM1,199 and GPS with cellular at RM1,399. Local availability needs to wait for further confirmation from Apple Malaysia website.

Apple has unveiled the much anticipated Apple Watch Ultra, along with the Apple Watch Series 8 and Apple Watch SE. The Apple Watch Ultra is meant for adventurers and sports enthusiasts to withstand extreme environments. It offers the longest battery life, up to 36 hours for normal use and up to 60 hours in low power mode, and is housed in a 49mm titanium case.

Other notable features include compass waypoints for quickly marking a place within the application. This allows users to retrace using GPS data to generate a path indicating where they’ve been, which is important if they become lost and require assistance retracing their steps. Equipped with an 86-decibel siren built for emergencies, the sound can help call attention to a spot if users become lost or injured.