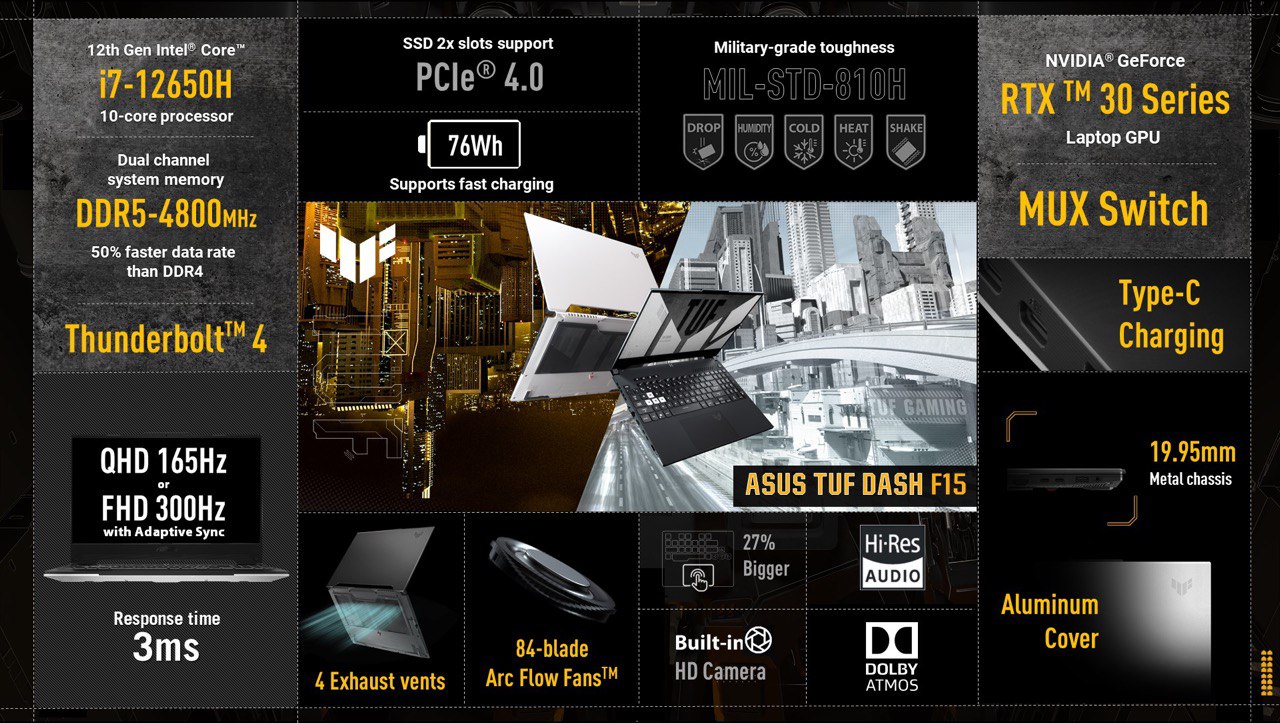 Asus Malaysia has announced the arrival of the 2022 ASUS TUF Dash F15 gaming laptop, which features upgraded hardware and a more streamlined chassis design than its predecessor. The TUF Dash gaming lineup was first introduced in 2021, and it’s designed to feature a thin and light form factor that is based on the fundamental idea of giving gamers amazing performance without breaking your bank account.

That being said, the new design has an aluminium top, narrow bezels for maximum immersion, and a compact 19.95mm body, as well as a 26% larger trackpad in a smaller chassis. The thin bezels and 80% screen-to-body ratio guarantee an immersive experience when watching content.

In terms of hardware, it features up to a 12th Generation Intel Core i7-12650H processor and up to an NVIDIA GeForce RTX 3060 Laptop GPU with a MUX Switch, along with a DDR5 RAM running at 4800MHz, making it possible to multitask even under the most demanding conditions with ease. Furthermore, dual PCIe 4.0 SSD slots ensure that gamers have more than enough high-speed storage.

All Malaysian variants of the ASUS TUF Dash F15 have a 76Whr battery and support USB Type-C up to 100W, allowing for continuously long hours of video playback without interruption. It also features an FHD 144Hz display panel with response times as low as 3ms and Adaptive Sync support for a fluid and snappy gaming experience.

Aside from that, further options for connectivity include up to 2x PCIe 4.0 slots, WiFi 6, and 2 USB Type-C connectors (1x Thunderbolt 4 and 1x USB 3.2 Gen2). You have the flexibility to easily upgrade your system thanks to the expansion slots that are accessible for both RAM and the SSD.

Here is a rundown of the features and official pricing for the ASUS TUF Dash F15 gaming laptop, which is currently available to purchase and comes in two colour options – Moonlight White and Off Black.